Professors, students, and staff who go to work and learn in Morrill Hall each day may be unaware of the building’s namesake, and what he means to Indigenous people in the United States.

Morrill Hall was built in 1868 on Gayogo̱hó꞉nǫʼ (Cayuga) lands that Ezra Cornell had acquired and was the very first building on what is today called the arts quad. Named after US Representative from Vermont Justin Smith Morrill, the hall was to commemorate the Morrill Act of 1862, which was signed into law by President Abraham Lincoln. Lincoln Hall was dedicated to Abraham Lincoln specifically for his role in signing into law the Morrill Act - officially titled An Act Donating Public Lands to the Several States and Territories Which May Provide Colleges for the Benefit of Agriculture and the Mechanic Arts. 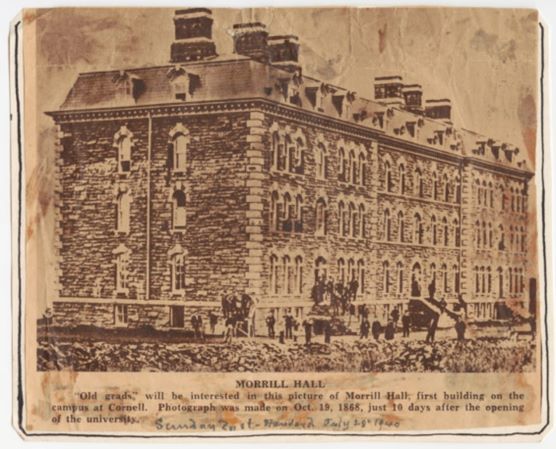 But lands deemed “free” or “public” to the US government were already home to hundreds of nations of people. The US federal government in the mid-1800s was cash-poor, but rich in land for one reason: the violent dispossession of Indigenous peoples. The Morrill Act took 10.7 million acres which had been stolen from over 250 different Indigenous and tribal nations by the US federal government, and used it to create seed money for higher education.

Cornell University was the single largest beneficiary of the Morrill Act, expropriating over 990,000 acres from over 230 different Indigenous peoples in 15 different states, with most acreage coming from Wisconsin and California. As the Morrill Act stipulated that monies from these lands must be held in perpetuity, Cornell University’s endowment is founded dually on Ezra Cornell’s own funds and on Indigenous peoples’ dispossession: removal from their lands, decimation of their lifeways, and at times extermination of the people themselves. 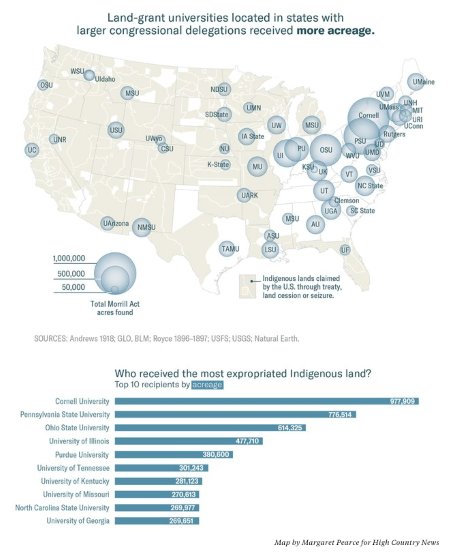 Most of these Indigenous nations are present today, many with knowledge of Cornell’s presence on their lands, and all of them living with the legacy of violent dispossession and genocide from which Cornell University benefited. Mineral rights and oil rights on these Indigenous territories, in some instances, are still held by Cornell University to this day. As the proceeds from the sales of these stolen Indigenous lands continue to enrich the university with annual returns, the peoples’ lands remain stolen.

Across the US and the world, universities and other institutions are reckoning with their histories of racial and colonial injustice and violence. Some of this work takes the form of re-naming buildings. At Cornell University, buildings have been re-named for much less. For example, Benjamin Franklin Hall, built in 1888, was re-named in 1980 to “Tjaden Hall” after architect Olive Tjaden Van Sickle (‘25), who funded contemporary renovations.

Cornell University maintains a commitment to serving society and remaining a place for any person to pursue any study. What kinds of places do commemorations of events such as The Morrill Act create? Our university buildings make up a social and institutional landscape, and those who work and live within it draw identity and a sense of belonging—or conversely, a sense of being out of place—from those memorializations. The names we give places express our collective values and relations to the past.

For that reason, renaming a building like Morrill Hall would constitute an important symbolic step towards confronting and counteracting the injustices from which our university has benefited. We are in favor of beginning the process of renaming the building in collaboration with local Indigenous communities. In doing so, we aim not to erase history or impugn Morrill as an individual, but to acknowledge a history of structural violence and express support for the continued concrete actions needed to repair the violence of US colonialism, past and present.