When Amy (Snyder) Kaminski ’98 was a kid, her grandfather took her outside to see meteor showers. She remembers being amazed and wanting to pick up every book she could on astronomy. That led her to enter Cornell as an undergrad planning to major in space sciences, and eventually to positions at NASA. 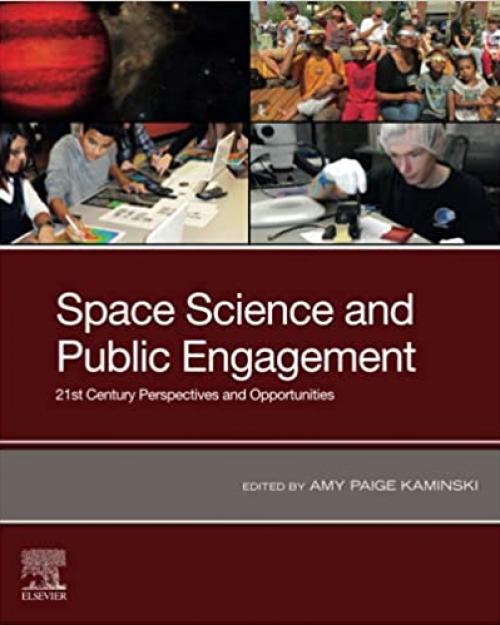 Now Kaminski is the editor of a new book about space science and public engagement and has a career that’s dedicated to helping people become involved in science research in a meaningful way.

“I believe strongly that space science is thrilling and should not be seen or kept as the province of credentialed ‘experts’ alone,” Kaminski said. “There are so many ways of understanding and knowing in the world, and space science benefits from the engagement of many.”

At Cornell, Kaminski took a science communication class with Professor Bruce Lewenstein and discovered a fascination with writing about science. She also began to wonder about  how science and technology fit into society, how policy decisions are made about science and who makes them.

“I had a general interest in so many areas of science and the College was starting a new program in the science of earth systems, so I took that and combined it with my planetary science courses,” she said.

After graduation, she held positions as a space transportation analyst with the Federal Aviation Administration and as a program examiner handling NASA’s space science and education budget within the White House’s Office of Management and Budget. She joined NASA in 2011 as a senior policy advisor to the chief scientist and moved into her current role as program executive for prizes, challenges and crowdsourcing in 2017. She earned her PhD at the same time, writing her thesis about public engagement with NASA’s space shuttle program.

During her early years at NASA, Kaminski was buoyed to discover myriad projects that involve citizen scientists and citizen innovators: Volunteers who analyze millions of satellite images looking for patterns; computer scientist tinkerers who create software to help solve technical problems; teams of designers who create 3D printed habitats that could be the shells of buildings we could one day construct on Mars.

“We’ve been engaging people for decades by disseminating information about science, but now we’re at this place where there’s dialogue, interaction and amazing contributions from members of society to the space sciences,” Kaminski said.

She created organizational structure to support and coordinate these numerous projects and advocated for an expansion of opportunities. Her new book, “Space Science and Public Engagement: 21st Century Perspectives and Opportunities,” was a natural outgrowth of this work and includes a range of authors and activities, presenting case studies with local, national and international impacts.

“My idea was to cover the breadth of what the landscape looks like, who can participate and the recent trends focused on accessibility, diversity and inclusion,” she said. “It is an honor to have had the opportunity to assemble this book to open the world’s eyes to the possibilities for future public participation.”

The book will be useful for space science researchers, educators within STEM fields and other organizations interested in engaging the general public in their work, she said.

“We have so much data at our fingertips, but funded science teams just don’t have the bandwidth to do all of the work,” she said. “And we’re also at this place in history where technology has empowered people to connect and engage. People are finding their voices.”

Cornell launches $5B campaign ‘to do the greatest good’

$25M center will use digital tools to ‘communicate’ with plants